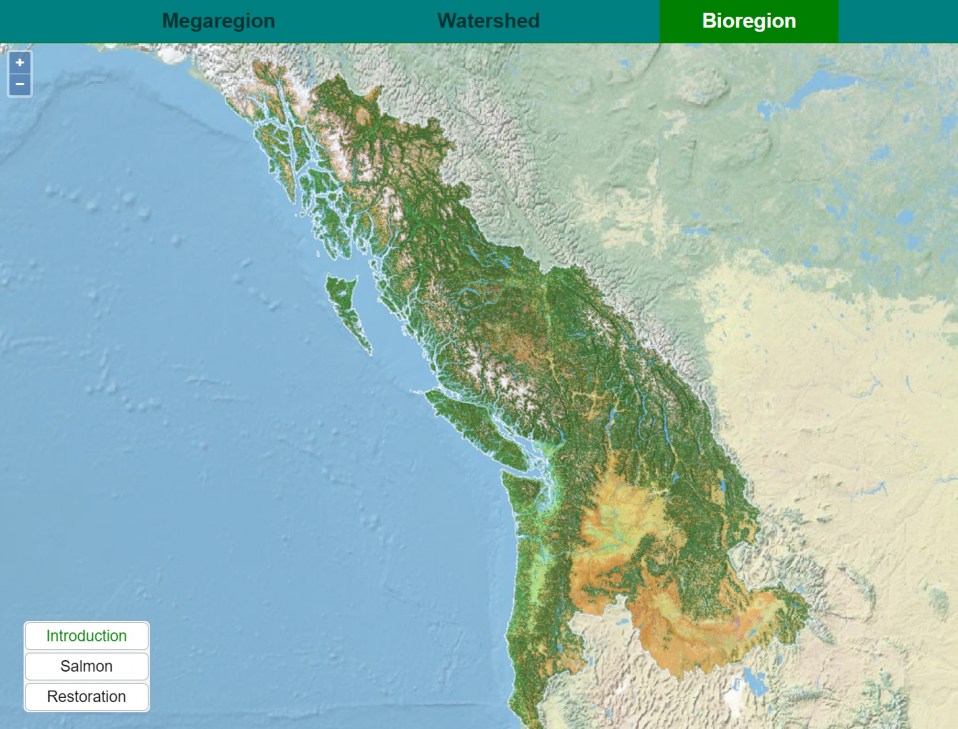 The Department of Bioregion is excited to reproduce two excerpts from Brian Holmes and Ecotopia Today, a collection of original research, cartography, and essays at a crossroads of cartography, politics, art, and social issues. His work addresses fossil fuel infrastructure, dams, salmon, agriculture, and the Hanford Nuclear Site in an interactive digital map. An ambassador from the neighboring Laurentia bioregion around the Great Lakes, Brian Holmes is a cultural critic who has worked with activists and artists in Europe and the Americas. He is interested primarily in the intersections of artistic and political practice, geopolitics and geopoetics. Ecotopia Today is curated by Portland based artist and Director of Center for Contemporary Art & Culture at Pacific Northwest College of Art director Mack McFarland, who will feature the work as part of “The Earth Will Not Abide,” dislaying at PNCA from November 01, 2018 – January 12, 2019.

The Columbia Gorge is one of the most beautiful sights on earth. But a watershed is more than a beautiful view.

The Columbia River watershed is a far-flung territory including parts of six US states and one Canadian province. Its border is traced, not by governments or treaties, but by every drop of liquid that finds a common path to the ocean.

Rainfall washes over forested slopes and grassy plains. Snow and ice collect on mountain peaks. Dew glistens on high deserts. Groundwater bubbles up from artesian springs. Pools spill over into rivulets that become creeks and gushing torrents, before rejoining rivers that gradually converge into a powerful flood. A watershed is defined by endless circulation through a territory. What it takes from the clouds, it gives back to the sea.

Human bodies are up to 60% water. We too are part of the shed, along with other living species. What we do outside ourselves inevitably seeps back in.

This map is about political ecology. It suggests that human decisions are shaped by exterior realities that have always already gotten under our skin. Like most maps, this one will guide you to real and imaginary places. It will deliver loads of information, with a wealth of topographical detail that increases as you zoom in. It will also show you texts and images, and it will even talk to you via multimedia recordings. The aim is to provide multiple viewpoints on reality. It’s an experiment in collective perception.

Watershed is a scientific category that provides the frame for citizen activism and advocacy. Two riskier and more speculative headings also appear: Megaregion and Bioregion. They’re like the red and the blue pill. Which one will you choose? Which one is which?
– –

“Living-in-place means following the necessities and pleasures of life as they are uniquely presented by a particular site…. Reinhabitation means learning to live-in-place in an area that has been disrupted and injured through past exploitation.”

With these words, Peter Berg and Raymond Dasmann invented bioregionalism. They conceived it not as starting fresh but as returning to things forgotten, with an awareness of past mistakes and a particular respect for the earliest inhabitants of North America. That was forty years ago. The inspiration was poetic, scientific and political.

Today, the Cascadia bioregion is a vast and diffuse idea that calls attention to the entangled destinies of natural environments and human beings. Thanks to the cartography of David McCloskey, the outline of Cascadia is recognized across national boundaries. Some movements call for its independence. But for everyone, interdependence is the crucial thing.

It’s clear that the subtlest and most powerful contributions to Cascadia come from indigenous peoples. Their treaty rights and assertion of traditional practices bring them to negotiating tables where the fate of land and water is decided. Often they invoke the needs of non-human species. Listen to the words of Native American activist Billy Frank Jr., who lived along the banks of the Nisqually River:

“I believe in the sun and the stars, the water, the tides, the floods, the owls, the hawks flying, the river running, the wind talking. They’re measurements. They tell us how healthy things are. How healthy we are. Because we and they are the same.”

How to become more sensitive to the places we inhabit? How to express this living-in-place to others? Here’s another idea from Peter Berg and Raymond Dasmann:

“There is a distinct resonance among living things and the factors which influence them… Discovering and describing that resonance is the best way to describe a bioregion.”

I act like a writer telling a story, or a painter painting a picture, of an organization,” said Brian. “ ‘Learning from Cascadia’ is an artistic atlas, composed and coordinated by an inquisitive stranger. It is inspired by all those who have created the bioregional identity of the Pacific Northwest …. The atlas also explores current social and political conflicts over environmental issues, such as water quality, toxic waste, land-use change, species survival, and more.

For a detailed examination of place, you can learn more about Cascadia, the Watershed, the Megaregion and Bioregion.

The Pacific Northwest College of Art (PNCA) in Portland will feature Brian’s art as part of the exhibition, “The Earth Will Not Abide,” this fall. He is collaborating with students at PNCA and other community members along the Columbia river watershed. The exhibition will feature works by Brian Holmes, Ryan Griffis, Sarah Ross, Alejandro Meitin, Claire Pentecost, Sara Siestreem, and Sarah Lewison with duskin drum. The exhibition poses questions about the ecological and social viability of industrial agriculture and extractive land use. Media for the exhibit includes video, creative mapping, paintings, and installation. For more information, visit ccac.pnca.edu. The exhibit is hosted by the PNCA’s Center for Contemporary Art & Culture, located at 511 NW Broadway, Portland, OR from November 01, 2018 – January 12, 2019.

Your ticket for the: Ecotopia Today: Learning from Cascadia