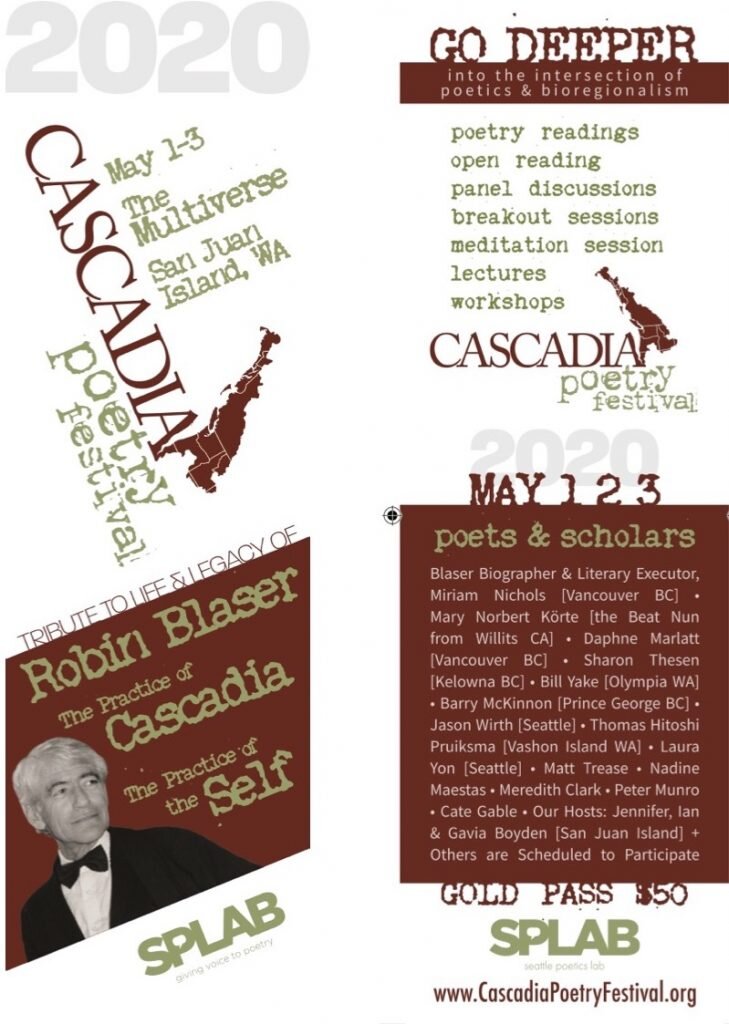 For the 7th iteration of the Cascadia Poetry Festival, SPLAB moves its bioregional cultural investigation to The Multiverse on San Juan Island. A gallery and island cultural center run by Jennifer, Ian and Gavia Boyden will provide a more intimate setting for festival attendees to go deeper into the intersection of poetics and bioregionalism.

May 1-3, 2020, poets and literature fans will gather to celebrate the Life and Legacy of Robin Blaser and delve into The Practice of Cascadia/The Practice of the Self.

Robin Blaser’s life and legacy will be one of two panels at CPF-SJI-2020.

In addition to poetry readings, an open reading and panel discussions, there will be several breakout sessions: lectures, workshops, a Sunday morning meditation session and discussions related to the two main organizing themes and/or to poetics and Cascadia.

One of the breakout sessions will cover the rare Islands Marbles Butterfly, once thought extinct, but found on San Juan Island. This breakout session will be facilitated by the National Parks Service.

The Embodied Imagination: An Experiential Workshop on the Practice of Cascadia

The Japanese Zen master Dogen once distinguished between what could be translated as not-thinking, the mere negation of thinking, and nonthinkingthat which points beyond or beneath thinking. With this as our starting point, well explore how poetry can issue from ones deeper body-and-mind, rooted in the earth beneath ones feet. Well take a meditative approach to an awareness of body and breath, and play with some unusual exercises for freeing ones voiceboth ones speaking or singing voice and ones voice as a writer. Well also consider how this exploration connects with a practice and poetics of place. Wear comfortable clothing and bring a notebook and something to write with. Facilitated by Thomas Hitoshi Pruiksma.

The Holy Forest as Method & Practice

Taking off from the title of Robin Blaser’s collected poems, this workshop will discuss Blaser’s use of the words holy and forest as a main focus, in addition to other mid-century spontaneous approaches, including Blaser’s and Spicer’s practice of outside and Charles Olsons projective verse, along with Frances Boldereff’s rarely acknowledged contribution to the latter. Participants are encouraged to bring a poem they’d like to workshop..  Sharon Thesen

Big Poetry and the Public World

This break-out session invites participants to push off from the Big Poetry section in chapter 7 of the Blaser biography (A Literary Biography of Robin Blaser: Mechanic of Splendor). In that section, I contrasted Blaser’s push for big poetry with some common literary-theoretical positions of the mid-1990s which would seem to preclude anything so ambitious. By big poetry I mean a poetry of cosmosone that speaks the world as do the creation stories, myths, and epics of the worlds cultures. Blasers own model was Dantes Divine Comedy.  The context of this section is the 1995 conference held in Blasers honor in Vancouver at the Emily Carr College of Art and the published proceedings of it, both titled The Recovery of the Public World (edited by Edward Byrne and Charles Watts, published by Talonbooks). The arguments that I selected from that publication which would seem to render a big poetry unthinkable are as follows:

The point of bringing these arguments into contiguity with Blaser’s oeuvre is not to defeat them in Blaser’s favour, but to explore the premises of Blaser’s position which I think come from a different starting point. The purpose of the seminar is to discuss those elements of the above  arguments that participants find compelling and current in the context both of Blasers work (and by extension that of New American poets close to him) and contemporary cultural landscapes: heterogeneous, globalized, presentist, unequal. Moderated by Miriam Nichols.

In this session, we will practice gentle yoga, conscious breathing and somatic meditation.  Attending to the body, breath, mind and heart is the fundamental focus of yoga. Flexibility is not required!  Laura will bring some mats and blankets, but if you have your own, please feel free.  Facilitated by Laura Yon.

The processional aspect of the world: some pointers from Robin Blaser on writing now

This will be a session that talks about what might be involved in writing our actual present.  It will begin with a brief talk that unfolds from the above phrase taken from Blaser’s germinal essay, The Fire. This session begins with the question: how write out of both the personal and the so-much-larger than personal in our crisis-riven time?  It will include a reading from one of his serial Image-Nation poems.  There will be time for discussion of these ideas and how they might be relevant to ones own writing practice in the present. If further time allows, there will be a prompt for an on-the-spot writing session. Facilitated by Daphne Marlatt.

Believed to be extinct until rediscovered at American Camp on San Juan Island in 1998, the Island Marble Butterfly is a true endemic  limited (as far as is known) to San Juan and Lopez Islands. One of the last colonies persists on National Park Service (NPS) land just a couple of miles from the Multiverse  site of the 2020 Cascadia Poetry Festival. Like us, its future is precarious. In this breakout session we plan to visit American Camp where NPS staff will show us how they are working to grow this the Island Marble colony by hand-raising butterflies from eggs, preserving their food plants, and improving their considerably abused habitat. It is not an easy task. We should also have some time to consider the role of butterflies and moths (ephemeral, evasive, and often pale) as they have inspired a range of poems and poets  including e
xamples from Vladimir Nabokov, Robin Blaser, Jim Morrison, and several poets native to Cascadia. Participants should bring a notebook (Rite-in-the-Rain might be best given weather uncertainty), a pen/pencil, outdoor clothing and sturdy shoes. Binoculars and a camera might also be helpful. Facilitated by Bill Yake

Your ticket for the: 7th Cascadia Poetry Festival will be May 1-3 2020 on San Juan Island