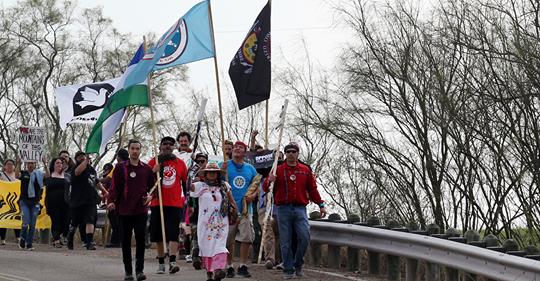 The Cascadia Department of Bioregion is excited to share solidarity with the Carrizo/Comecrudo people and nations as indigenous organizers work to block construction of a wall over traditional territory near the city of Mission in Southern Texas / Northern Mexico.

Bioregional activists joined several other dozen indigenous organizers and their supporters against the construction of a six-mile section of the wall at the southern border of the United States. The wall is already under contract with a Galveston construction company. Construction is scheduled to begin this spring.

The Cascadia Doug Flag joins a chorus of bioregional and resistance symbols used around the country and world, helping represent solidarity with other bioregional movements, indigenous causes, and as a symbol that moves us away from systems which are toxic and negative for our planet, and those living on it – and towards systems which can better represent bioregionalism, as well as the place and people. It is ‘the flag’ but rather, a symbol and one of thousands, each of which make a different cause, ecoregion or movement. Other great examples of bioregional solidarity have included Great Lakes solidarity, being present at Standing Rock, actions associated with the Cascadian Thin Green Line, and now more recently with the Unistoten & Wet’suwet’en actions in Northern Cascadia.

As reported by Native News

The six-mile wall will be constucted in Hidalgo County, Texas of concrete and topped with 18-foot steel poles. One hundred and fifty feet of of land will be cleared on either side. American Indians in the area, primarily from the Carrizo/Comecrudo tribe opposed the wall. They see it as a disruption to their cultural and spiritual history. Juan Mancias, tribal chairman for the Carrizo/Comecrudos, says his ancestors once had villages all along the Rio Grande.

“They haven’t consulted with us because we’re the original people of this land. We have the inherent right to this land.” he told a local news source. “And those people who have came in afterwards, they really don’t know where the villages are.”

The construction and wall will also destroy and divide hundreds of acres of incredibly diverse terrain and ecosystem, including the construction of a 18 feet of steel bollards on top of an 18-foot concrete wall, as well as 150 feet in each direction. One area impacted is the National Butterfly Center, which has as many as 200 species in a wildlife area that will be devastated by bulldozing and disrupted by vehicle traffic, bright lights, garbage and increased human activity, Wright complained. The wall will trap some animals on the river side during floods, and those on the other side away from water they need to survive.

The area is incredibly diverse. Mission, Texas is part of the Gulf Coast Prairies and Marshes Ecoregion. A narrow band about 60 miles wide along the Texas coast from the Louisiana border to Brownsville roughly outlines the Gulf Coast Prairies and Marshes. This area is characterized by long and continual confrontations with the sea, wind and rain. These confrontations shape this place creating a tapestry of shallow bays, estuaries, salt marshes, dunes and tidal flats. Because of this proximity to the Gulf of Mexico, the plants of this region must be highly salt tolerant or halophytic.

Coastal areas are rich in wildlife. Coastal marshes harbor hundreds of thousands of wintering geese and ducks and provide critical landfall in the spring for neotropical migratory birds. Several important wildlife sanctuaries and refuges are located in this region including refuges for the endangered Attwater’s Prairie-chicken and the Whooping Crane. Coastal dunes may serve as sentry roosts for north bound Peregrine Falcons in the fall. Coastal waters are often graced by willets, sanderlings, gulls, terns and Black Skimmers.

As quoted by the Cascadia flag creator Alexander Baretich

“The flag is a bioregional awakening. Many if not most of the butterflies (as well as migrant birds) pass through this area to Cascadia. And in the case of the birds back to the various bioregions of Mesoamerica.“

The Cascadia Department of Bioregion is proud to stand in solidarity with those helping to defend and break down the borders that divide the borders and ecoregions of southern North America.

Your ticket for the: Cascadia Solidarity with Carrizo/Comecrudo Earth Defenders as they protest US/Mexico Border Wall