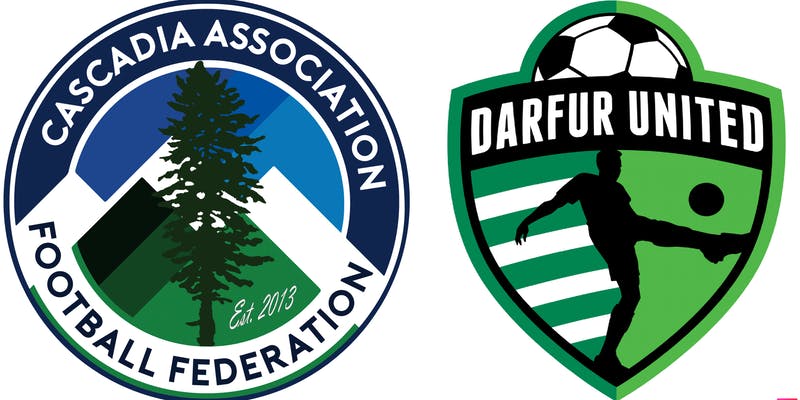 Cascadia vs. Darfur United The first ever CONIFA friendly in North America

Help us make the first ever Cascadia match a huge success! Buy your ticket here at EVENTBRITE

Stream the match live at: https://mycujoo.tv/video/cascadia

After a successful run at the CONIFA World Football Cup last summer, Cascadia is finally bringing it home! This will be the first ever CONIFA event in the western hemisphere. We welcome Darfur United, representing the Darfur region of Sudan, to Cascadia. This will be an exciting match! Be here for history!

So far all of Team Cascadia matches have taken place in London. After playing the 10 match whirl wind in the ConIFA World Cup in 2018, their next challenge will be on May 25 against the Chagos Islands in Whyteleaf, South London.

Cascadian Association Football Federation (CAFF) organizers have long been aware of the logistical difficulties to playing at home, notably the shortage of ConIFA opponents within North America.

Now it has organised its first ever home game.

The match will take place at the Frenchfield Stadium in Kent, WA on July 27 and the opponent will be Darfur, a region in western Sudan with a population of just over 9 million. The venue has a capacity of 6000.

“We are very excited to finally be playing a match on home soil. After the WFC and planned game against Chagos, the time has come to give the home fans something. Darfur will be a great opponent, with a great story.

“We couldn’t be happier to be playing them.”

Darfur United was formed in March 2012 with representatives from twelve Darfuri refugee camps located in Chad, invited to try out for the Darfur United team. 16 players were initially selected with four players also offered roster spots in the case of the need to replace any players. The team participated in the 2012 Viva World Cup, which was hosted by Kurdistan Iraq in June.

The operational aspects of this football team have been overseen and orchestrated by i-ACT, a humanitarian group located in Los Angeles, California, and directed by Gabriel Stauring and his team of volunteers. The team’s head coach is Mark Hodson of EVO Soccer Programs and Manhattan Beach Sand and Surf Soccer Club. Hodson is an NSCAA Premier License holder and has been a professional coach since 1999.

Ben Holden of Bradford, UK, became the team’s assistant coach in May 2012 to help manage the team at the 2012 Viva World Cup in Iraq/Kurdistan. The 27-year-old worked as a coach in Los Angeles in 2006 for a year; head coach Mark Hodson (whom he met whilst coaching in the US) called him and asked him how he felt about assisting him coaching Darfur United in June’s Viva World Cup 2012.

The 16 players who made up Darfur United’s squad were all former Sudanese refugees who, having escaped the war-torn area, got the chance to represent Darfur abroad in a global competition. Darfur have competed in the 2012 VIVA World Cup and the 2014 version of the ConIFA World Football Cup where they won the Fair Play award. A documentary called Not Just Football was made about the team.

Your ticket for the: First Cascadia Home Match Less Than Two Weeks Away! Cascadia V Darfur United in Kent, WA