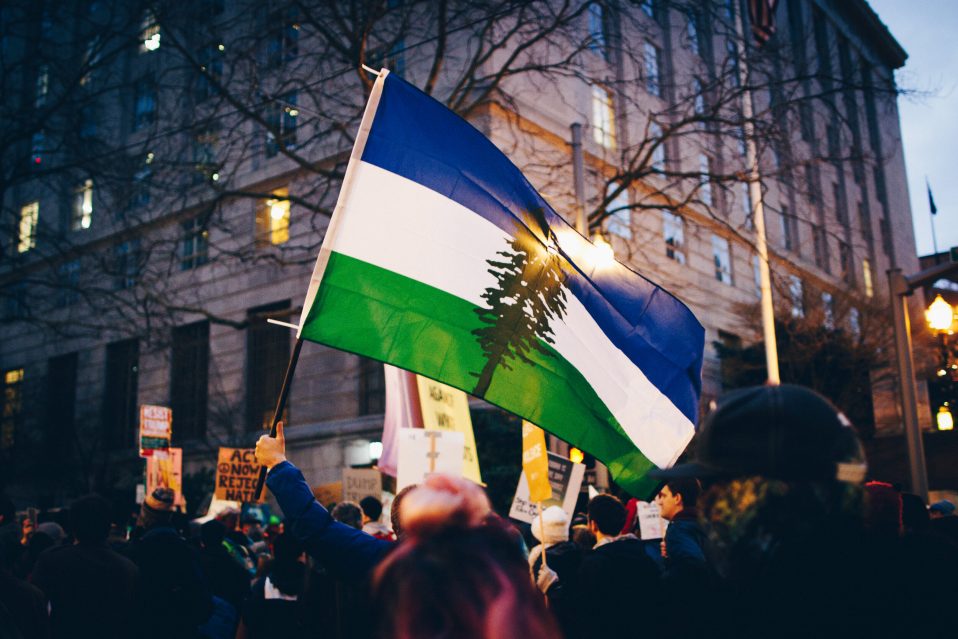 Cascadia must stand up for itself

Cascadia is a region and movement on the front lines of every major crisis and issue currently facing our world. We are the thin green line between resource extraction in the east and booming global markets in Asia, an epicenter that is home to the wealthiest corporations and individuals in an increasingly globalized market, while also on the forefront of green technology, energy and localized systems of resiliency and community. As millions of people move here desperate for a glimmer of an ever shrinking dream, crushed by increasing debt, forced to endure a system of ever increasing corruption and as ever more people scramble to make it day by day, we continue to have no real representation of the will of our citizens, regions or voters on a national or global level.

And yet Cascadians weather it all with a passivity that would baffle people anywhere else in the world.

On a federal level, trust in our public institutions has never been lower. South of the border only 17% of Americans today say they can trust the US government. Regardless of party affiliation, approval ratings sit at historic lows – and they are only getting worse. In Western Canada, in a country of 30 million and less than 153 years old sentiment in British Columbia and Alberta range from 44-56% that “Western Canada gets so few benefits that it may as well go it on its own”. Recent scandals, election and varying views of the environment have only reinforced this sentiment of divorce.

Everywhere in the world right now, and everywhere across our countries and region, people are saying that we need a change, but no one is saying how, or presenting a real way of how to achieve it.

We in Cascadia are in a unique position to provide a solution.

Bioregionalism provides this pathway. At it’s root, it says that by starting with our watersheds, the geology, the plants, the animals, and the cultures that have developed within them, we can create systems which better represent the place, the inhabitants and the people. This philosophy argues that culture stems from place, and by sharing an area, we will have different needs from other areas, and a shared sense of identity stemming from that place.

Bioregionalism is a place based idea and movement that reflects one of the most important, yet least known or understood philosophies that may exist today. It uses “bioregions” – the largest collection of watersheds where connections based on place make sense – as a framework, guided by key principles, to break global issues down to a local level and move our actions and impacts to where individuals have the greatest say in the issues that affect their lives. Different communities will have different needs and learned experience, and will different ways to live best suited to each area.

We use watersheds because natural borders ignore human ones and if we want to talk about what true sustainability looks like, or food sovereignty, or energy independence, those discussions must include every community along a watershed. Beyond that, it is a philosophy and system that seeks to truly decolonize our boundaries and ways of living. A bioregional way of living works within the constraints of what a bioregion can provide, fits into a global system in a responsible way, and develops cultures that regenerate each watershed by putting more resources back in than it extracts.

There will be no one right answer, or one right solution. Rather it will be hundreds of solutions working together, adapting to fit different needs of different backgrounds, locations and contexts, to achieve the real change that we want to see. Together, bioregionalism provides a unifying set of principles and organizing methodology, and is a powerful tool for connecting and breaking down large, urgent global issues to specific areas, and creating simple, accessible pathways for action and change.

Bioregionalism was born here in the 1970’s. It has matured, and now several generations of Cascadians have grown up with the idea. If it will happen anywhere, it will be here.

Building a Place Based Politic

The goal of a bioregional movement is to develop a new place based politic.

Red or blue, conservative or liberal, democratic or republican. Each are terms that stem from a dysfunctional political system that is negative, toxic and arbitrary, disconnected from place. Borders are redrawn to disenfranchise voters we don’t agree with and all attention focuses on the 2% wedge issues of how we are different, rather than the 98% of how we are the same. Money is dumped in from one area to drown out voices from another. Different areas, with different needs are pitted against each other. By breaking down issues by watershed, and decentralizing decision making powers to those most impacted, we can create systems that are truly healthy and representative for the place and the people living within it.

When wildfires strike each year, it affects all of us. When a drought strikes our farmers, it impacts all of us. When the Cascadia megaquake hits or a volcano erupts, it affects all of us. Seattle, Vancouver and all the communities around the Salish Sea recognize the importance of working together around watersheds because despite being divided by an international border, they share one. Those east of the mountains agree with those west that we all might be better off if we had a greater say in our own affairs, and that the needs of a rural area might be very different from that of an inner city or suburb.

Right or left, on issues of environment, pollution, energy, food sovereignty, and so many others, each community along a watershed must be able to substantively participate in the issues affecting their lives.

For example, whether or not someone thinks that logging in the Pacific Northwest is good or bad, when it is held in the Cascadia bioregion we can have that conversation and directly affect policy one way or the other, as well as ensure ethical and responsible business practices. If it comes to it, we can go directly to the forests to take in a first hand account, go to the corporate headquarters, or the offices of the lawmakers who make the decisions. When hardwoods are being extracted from a foreign place, consumers have no say in the sourcing or labor practices that go into that product. Supporting this bioregional supply chain empowers communities, supports workers, encourages responsible sourcing and labor, grows local representation, is good for local business, gives higher standards for workers and reduces the carbon footprint.

For a place based political movement this means that we must be visionary and utopian in our long term approach, and pragmatic in adopting short term solutions. This means not just reacting against what we find negative, but building a positive vision that we can be working towards, with tangible and definable goals for how we get there.

What does a Cascadia Political and Bioregional Movement look like?

Which brings up the question then, what does a Cascadia place based, bioregional or political movement actually look like? Well, working with the principles that we have outlined so far, below are a few simple steps that a regional movement would incorporate:

What we do here is felt around the world

Stretching along more than 2500 miles and 4000 kilometers of rugged coastline, Cascadia sustains more than 16 million people and generates roughly $1.613147 trillion dollars worth of goods and services annually. As the world’s 9th largest economy, our bioregion has a larger economy than Russia and is roughly equivalent to that of Canada or Italy. Some of the worlds largest companies, including Amazon, Starbucks, Costco, Boeing, Microsoft, REI, Nordstrom, T-Mobile, Lions Gate, Nike, Adidas, and Columbia Clothing call our region home. With a GDP of 356 billion, the largest city Seattle has an economy slightly smaller than Thailand, but larger than Colombia and Venezuela.

As a coastal bioregion, it is gateway for trade to and from North America, has the largest civilian ferry fleet in the world, holds nine of eleven deep water ports and dry-dock facilities on the West Coast, and is considered the ‘Thin Green Line’ between ecologically destructive resource extraction within the North America interior and heavily fossil fuel dependent economics on the other side of the pacific. Our region is the literal gate keeper between what arrives into North America, and what makes it there. In terms of Climate, our home contains the largest tracts of untouched old growth temperate rainforests in the world, 7 of the top 10 worlds carbon absorbing forests, the worlds tallest trees, thousands of volcanoes, hot springs, rivers, lakes, inlets, island and ocean, and some of the last diminishing, though still impressive wild habitats of salmon, wolves, bear, whale, orca and other amazing, but rapidly disappearing creatures.

These facts matter a lot, because ultimately, by living here, Cascadians have a disproportionate ability to effect and inspire global policy and imagination.

The local impact that we have here in Cascadia, reverberates around the world.

Using these outlined principles, it is time for a stronger Cascadian political identity, a true confederation of people working for these goals and a more assertive relationship with our local leaders, and with those currently claiming to represent us in Washington DC and Ottawa. Each of us has more power, knowledge and technology at our finger tips than any other generation in history. The answers we need will come from no where else, and from no one else, other than ourselves, right here, in this place, right now. Inaction now will lead to consequences for generations, and as long as we continue to live in a political system derived from arbitrary boundaries not representative of the place we live or the people living here, drawn along colonial borders by people who had never set foot here, we will never have a truly democratic government, or the solutions we need.

If there’s one thing that can unify our region around a common sense of purpose, perhaps it’s Cascadia and a positive vision that we can all be working together to create. In the meantime however, we must be pragmatic, and build a movement that can effectively defend our values, our inhabitants and way of life we have built for ourselves and a government that can speak with our voice.

To build a real Cascadia political movement it will take all of us. Not one voice, but thousands all working together for one goal.

Will you join us?

Your ticket for the: It’s time for a Cascadia Political Movement.