Native Place Names – From Tahoma to Rainier and back. 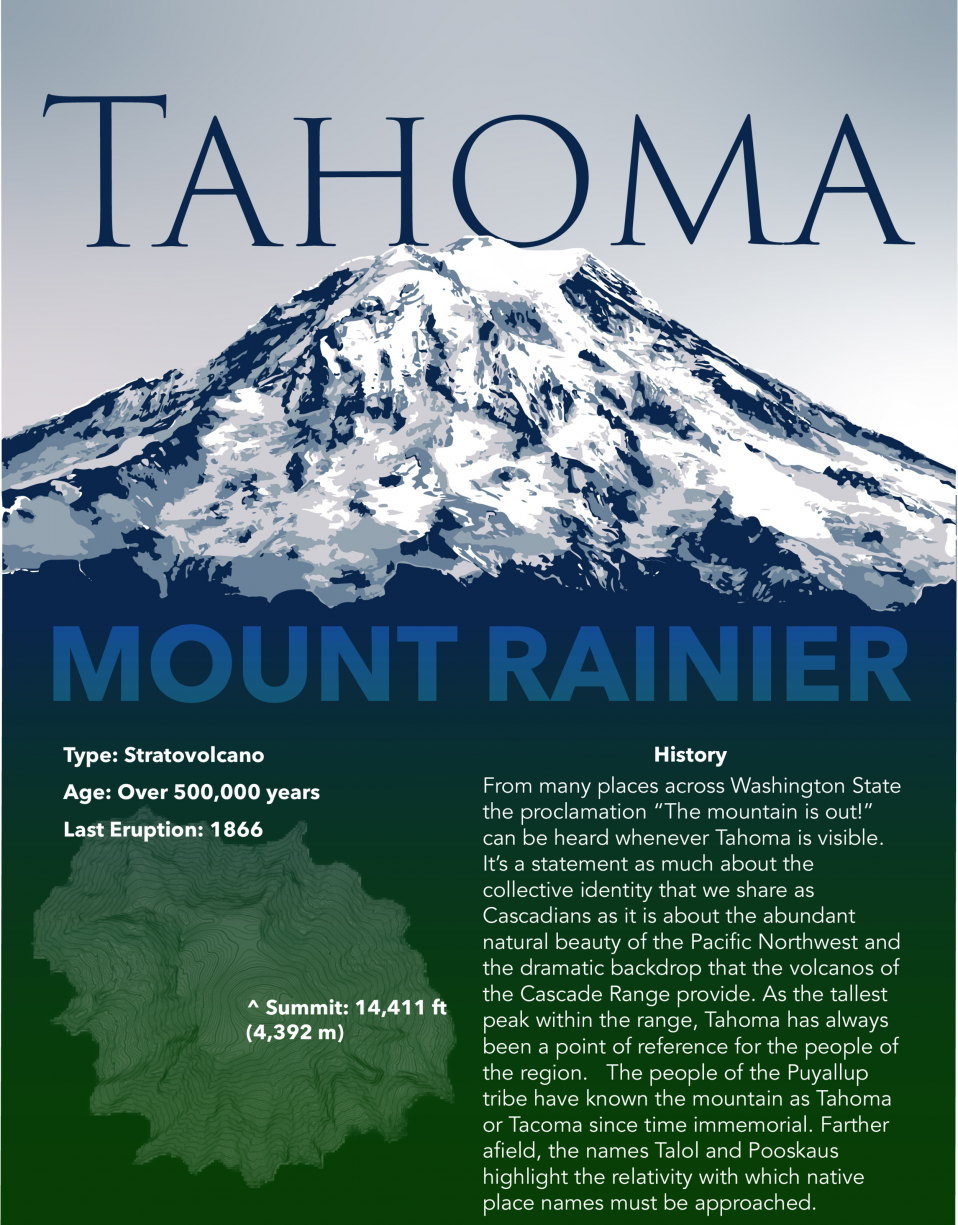 From many places across Washington State the proclamation “The mountain is out!” can be heard whenever Tahoma is visible. It’s a statement as much about the collective identity that we share as Cascadians as it is about the abundant natural beauty of the Pacific Northwest and the dramatic backdrop that the volcanos of the Cascade Range provide. As the tallest peak within the range, Tahoma has always been a point of reference for the people of the region.

The people of the Puyallup tribe have known the mountain as Tahoma or Tacoma since time immemorial. The word has multiple meanings, all with bioregional relevance. By definition, Tahoma can mean mother of waters or that frozen water both recognizing the glaciated peak as the significant source that it is. The word is also understood to mean large snowy mountain, a trait it certainly exemplifies. Another etymological explanation derives from definitions of the name’s component parts in the Lashootseed language; Ta (larger/taller) Koma-Kulshan (name for Mount Baker). Farther afield names such as Talol and Ti’Swaq are also applied to the mountain, reflecting the relativity with which native place names must be approached.

So with an abundance of names already available, why Mount Rainier? The mountain was given that name by Captain George Vancouver in honor of his friend Rear Admiral Peter Rainier Jr. One would assume that Admiral Rainier accompanied Captain Vancouver, but no. The closest Admiral Rainier ever came to Tahoma was when he went to the East Coast of the continent to fight for the British in the Revolutionary War, a fact making the common/colonial name all the more absurd. In the article “A Case for Tahoma” writer Cooper Weisman states:

The name Rainier strikes me as utterly meaningless in comparison with the indigenous appellations because the only story Rainier tells is one of colonization. Tahoma, on the other hand, carries with it the invaluable narratives of the first people of this land including one in which a great flood threatened the lives of people and other animals in the region who were only able to survive by scrambling to the top of the peak and remaining there together until the waters subsided. For mountaineers and others in this area, Tahoma continues to be a place of refuge from the many problems that flood our minds and our society today.

Here at the Department of Bioregion, we couldn’t agree more.

Your ticket for the: Native Place Names – From Tahoma to Rainier and back.

Native Place Names – From Tahoma to Rainier and back.