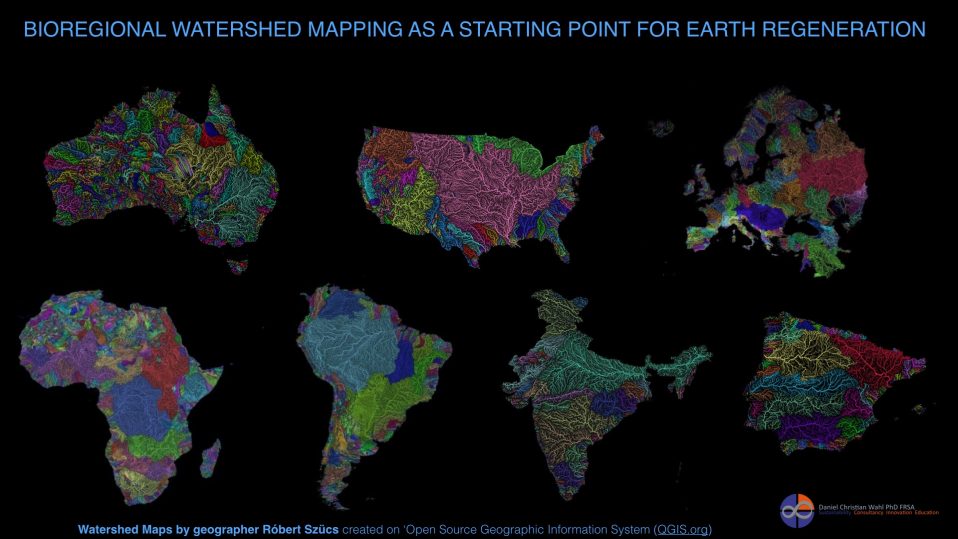 The Department of Bioregion is excited to share this essay on organizing bioregionally from Daniel Christian Wahl, author of Designing Regenerative Cultures and teacher of the online course Design for Sustainability. The essay can be found on his medium site here.

Kirkpatrick Sale states the rationale for bioregional organization in terms of scale, economy, polity, and society in his book Dwellers in the Land (Chapters 5–8):

Scale: People can understand issues and their connections to them at a scale where the forces of government and society are still recognizable and comprehensible, where relations with others are still intimate, and where the effects of individual actions are visible. This is the scale where abstractions and intangibles give way to the here and now, the seen and felt, and the real and known.

Economy: A bioregional economy would seek first to maintain rather than use up the natural world, to adapt to the environment rather than try to exploit or manipulate it, to conserve not only the resources but also the relationships and systems of the natural world. This economy would also seek to establish a stable means of production and exchange rather than one always in flux and dependent upon continual growth and constant consumption.

Polity: A bioregional polity would seek the diffusion of power, the decentralization of institutions, with nothing done at a higher level than necessary, and all authority flowing upward incrementally from the smallest political unit to the largest.

Society: Symbiosis is as apt a model as any for a successful human society, which we may envision as a place where families operate within neighbourhoods, neighbourhoods within communities, communities within cities, cities within regions, all on the basis of collaboration and exchange, cooperation and mutual benefit, and where the fittest is the one that helps the most — and of course is thereby the most helped. The most important instance of such an interaction on a bioregional scale would be the social symbiosis between the city and the countryside.

The sustainability consultants Pooran Desai and Sue Riddlestone of the London based consultancy BioRegional suggest that we need to reconsider the scale of our production systems and create more locally self-sustaining communities in compact cities. They propose that “creating stable regional economies can help to create a sense of community and security that can alleviate the stresses inherent in a globally competitive world”(Desai & Riddlestone, 2002: 75). Desai and Riddlestone ask the question: “What route might development take on a more bioregional planet?” (Desai & Riddlestone, 2002: 76); and answer their own question as follows:

“By ensuring that the economy is taking into account all the costs of environmental damage, fossil fuels and other non-renewable resources would become more expensive. Transport, particularly by air, would cost more, so that market forces would create an economy in which goods were moved around much less. This would shift production towards a more local and a smaller scale. In agriculture, the competitiveness of local farmers would increase, creating a healthy farming ring around the city. The proximity of these farms to the cities would mean that the farmers could use organic wastes and sewage from the city for fertilizing their fields, creating a symbiotic relationship between city and farms. […] In industry, the economy would favour local production of bulk commodities. Local paper recycling would become the norm. Losing the economies of scale by moving to smaller scale production in reality would simply shift employment away from the transport sector to jobs in recycling, local manufacturing, farming and forestry. Whilst smaller scale production might increase labour costs per unit of production, these would be offset by lower investment costs and greater adaptability to local conditions. […] Creating a more balanced regional, self-regulating, diverse and stable economy will create greater richness in opportunities for people to chose a wide range of careers and vocations. The connection between quality of life and economic diversity will become increasingly evident. […] Regional scale development encourages people to become engaged, creating an environment in which the political ideal of subsidiarity can be expressed.”

Brunckhorst (2002: 133) suggests a series of guidelines for how to implement bioregion-based planning and decision-making frameworks effectively.

Implementing the Bioregional Approach in your day-to-day life:

Make a seasonal wheel, a circle bisected by twelve angles (one for each month of the year). Record the cycles of plants, animals, weather, and cultural events within and around the circle. Note the date or week when a bird began building a nest near your house, when the babies hatched, and when they fledged. Note the date that your favourite flowers emerged, blossomed, and went to seed.

Begin a nature journal to record daily experiences and history of your neighbourhood or sub-watershed. Note the specific location, time of day, weather conditions, sounds, what the animal was doing or eating. Draw and colour illustrations to bring the journal to life.

Map your backyard. Map places that feel special to you, and write why the place feels special. Map places that you have seen animals, their burrows and habits, native plants, geologic formations, and historic information about your house or neighbourhood.

Map your local water cycle. Where does your water come from and where is the wastewater discharged? You can include the location of any reservoirs, treatment systems and discharge points. You might decide to show the locations of the major components on Google Earth maps.

Tell the story of your area. Learn the natural and human history of your bioregion and turn it into a story that will interest both adults and children.

Cook local food. Cook a meal for your family or friends using only fresh food that you know originated from within 20 miles of your home or that you have grown in your garden.

Look for an aspect of the bioregion that needs your help. It shouldn’t be too hard to find! Help clean up a polluted waterway or a deteriorating neighborhood, school, park, or wild place. Create a team of people who share your concern and meet regularly to have work parties.

Daniel Christian Wahl works to catalyzing transformative innovation in the face of converging crises and is the author of Designing Regenerative Cultures. His early career worked as a marine biologist, and went to school for biology, zoology and has a PHD in Natural Design.

Daniel teaches a wide range of workshops based on sustainability issues for local organizations, activists, businesses, and local governments including the UN-affiliated training centre CIFAL Scotland, United Nations Institute of Training and Research (UNITAR), and the British Government’s UK Foresight (with Decision Integrity Ltd.), LEAD International, CLEAR Village, and companies like Camper, Ecover (with Forum for the Future), Lush and the tourism innovation cluster Balears.t, as well as, various universities and charities. He was the director of Findhorn College between 2007 and 2010, during which time he helped to create the MSc in Sustainable Community Design (Heriott-Watt University), co-founded the ‘Learning Partnership for Creative Sustainability’ and co-organized two international Bioneers conferences in Holland and Findhorn.

Daniel lives on Majorca, and works locally and internationally as a consultant, educator and activist. In 2012, he co-founded ‘Biomimicry Iberia’ and in 2015 co-organized the first practitioners camp of the ‘European Biomimicry Alliance’ (EBA) on Majorca. He collaborates with the Masters of Design and Innovation at the IED (European Institute of Design) in Madrid, has taught at Elisava Design School in Barcelona, and co-developed the S.M.A.R.T. UIB project of the Universidad de las Islas Baleares (Sustainable, Multi-stakeholder, Applied, Regenerative, Transformative) where he is helping to develop a series of programmes in transformative innovation. Daniel has published numerous articles and academic papers and collaborated with a number of documentary film projects. Designing Regenerative Cultures is his first book.

Your ticket for the: Organizing Bioregionally: By Daniel Christian Wahl