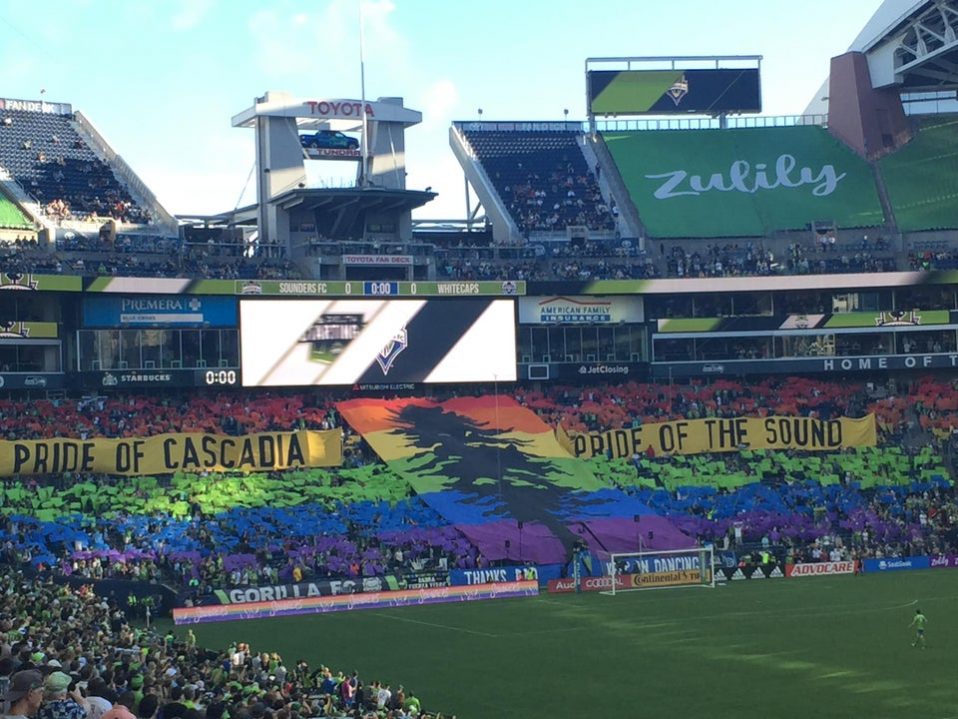 The Emerald City Supporters and the Seattle Sounders FC revealed a massive rainbow Cascadia TIFO display in their pregame opening against the Vancouver Whitecaps on the evening of June 30th.

From the Emerald City Supporter group.

For many of us, pride is a safe and easy experience. We can feel pride in ourselves, our city, our club, and our supporters group with no risk to ourselves. For our LGBTQ+ friends and comrades, however, the simple act of being proud to be themselves is a radical and often dangerous act, risking erasure, discrimination, abuse, and violence.

Our message, “Pride of Cascadia, Pride of the Sound,” celebrates both the pride we feel in supporting the best club in Cascadia and the pride of our LGBTQ+ siblings to be themselves, help create space for others, and flourish in our football community.

This TIFO featured a Cascadia Rainbow Doug Flag and read ‘“Pride of Cascadia. Pride of the Sound.” It was constructed using rainbow tarps, and employed several hundred fans each waving rainbow colored flags, completely filling the Brougham End. The Gorilla FC and other supporter groups keep the chanting going all match, never sitting.

Tifo is the Italian word for the phenomenon of supporting a sport team. In some countries it is mostly used as a name for any choreography displayed by fans in the stands of an arena or stadium in connection with a sporting event.

During Cascadia Cup matches – each Cascadia team, the Vancouver Whitecaps, the Seattle Sounders and the Portland Timbers and their supporter groups – each reveal massive choreographed presentations before a match. To show the inclusive and positive diverse communities that make up the Cascadia bioregion, the three teams have also made it a tradition to each host PRIDE related TIFOs during June.

The Timbers Army also unveiled their TIFO earlier this month, showing a display in honor of PRIDE that read “For Pride, For Equality, For Unity, For Love, For Human Rights, Timbers Army Stands for All” at Providence Park.

In 2004, supporter groups from the three teams officially created the Cascadia Cup , pooling their money to buy the trophy that is still given at the end of each season. In 2011, as the last of the three teams entered into the MLS, the competition resumed its rivalry, spurred to new heights by an ever expanding fan base and rapidly growing supporter groups.

Displays by the Portland, Seattle and Vancouver supporter groups have been an intrensic part of the rivalry since its inception.

For those not familiar with the Cascadia Cup or our the symbolic importance of Cascadia in this rivalry, the display tonight gives a run for the money of the the largest single piece TIFO to date, created by the PTFC in Portland on June 24th, 2012 that stretched more than 280’x80’. Weighing more than 1500lb the 20,000+ square foot TIFO was raised by 66 individuals on 22 rigging lines, and was the largest display in MLS history. The banner, raised by the Timber Army showed the Portland Skyline above a picture of the legendary Clive Charles, flanked by a massive city flag and, of course, the Cascadian Doug flag. Others, can involve hundreds of participants, as pictured below.